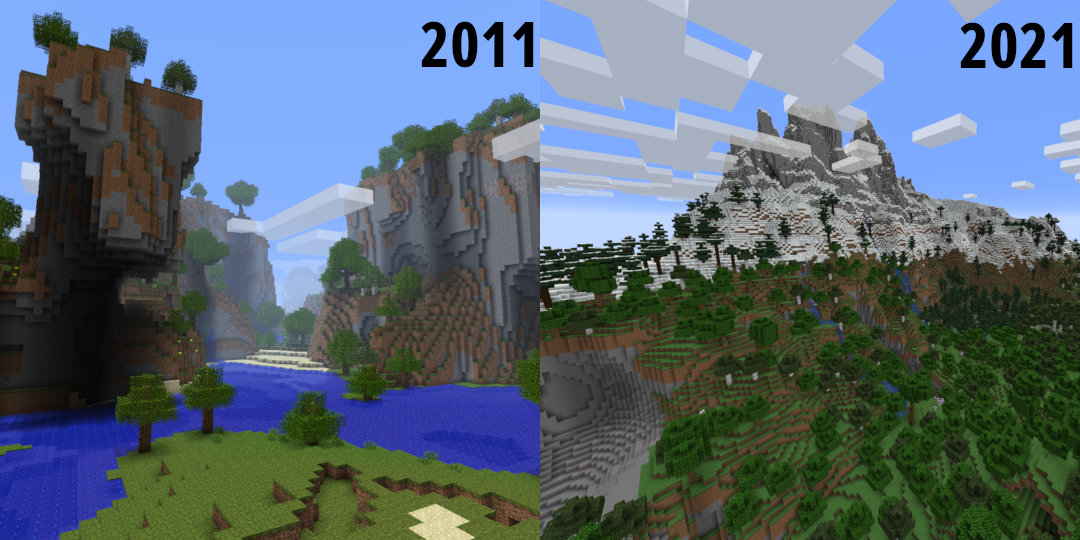 I was quite a big fan of Minecraft when I started playing it in early-2011. I have stopped in recent years since I find it dangerously addictive, though I sometimes keep up with the new changes. Today I want to look back at a development mistake that was made in Beta 1.8, one that took a decade to recover from.

In the b1.8 update, the terrain generator was subject to a rewrite aimed to make the code simpler. This was back in September 2011, the game was nowhere near as popular as it is today, only a small portion of today's players even know about it. But at the time it caused quite a controversy, a thread on the Minecraft Forums decried the new terrain as "boring", and quickly became the most replied topic on the site.

When biomes were first introduced into the game, a parameter was added to limit terrain height on a per-biome basis. At first this was used very subtly, but in Beta 1.8, out of what I can only assume was an attempt to make the land more realistic, every biome was made flat and smooth. Except for one called "Extreme Hills", a biome with a dull green colour and no flora. Looking at the forum post's comparison image between b1.7 and b1.8 demonstrates this.

Despite these issues, Mojang rushed to get the game to 1.0 in time for Minecon 2011. The initial response to the forum thread by Mojang developers was either dismissive, or missed the point.

It may seem like a small complaint, but world exploration is a big part of the game. I can say that for me, I stopped playing survival after this update, preferring multiplayer creative with my friends.

Thankfully the worst issues were addressed in October 2013 for the 1.7 update. Most biomes received an "M" variant, which would allow more vertically interesting natural formations. And some biomes that were previously dropped in b1.8 were re-added. Also worth mentioning that the "Mountains" biome replaced "Extreme Hills" and resembled a realistic mountain.

This update was a massive improvement, but I still felt something was missing. Life moved on, but everytime I returned to playing the game, I felt the terrain was held back.

Mojang, for the best part of the mid-2010's have been adding fluff to the game, rather then focusing on technical improvments. Thankfully in the last few years it seems Mojang are willing to expand and improve on the game's core components.

A few years ago I decided to poke around with Minetest, an open-source Minecraft-style game. The worlds here were far more interesting, flat land was just a possible as very tall mountains, and the cave systems were massive. I realised an important technical difference.

Minecraft worlds stretch far and wide in the X and Z axis, but what's odd is that the Y axis (up and down) is limited to only 256 blocks. I believe Mojang didn't want the terrain to generate near the build limit, so the "Mountains" biome needed a limit, and the "M" variant biomes couldn't be taller than the main "Mountains" biome. This limit is likely the reason why Minecraft worlds are so uninteresting vertically speaking.

In Minetest the limit is far higher (16,000 if I remember correctly), so the limit for mountains is set much higher, and this is why the caves are so much larger. (Side-note: The caves in this new update very closely resemble those in Minetest.)

So I was quite pleased to hear that a "Caves and Cliffs" update was planned for 2021.

It's now common to find interesting looking hills in most biomes now. And if you search (about 3-5 minutes of flying), you can come across significant mountain ranges, all looks good. I also noticed a few new biomes for these mountains as well, some of them quite lush.

And if you search on the internet, you can find very impressive screenshots of this new terrain.

To top it all off, Mojang have introduced a chunk blending feature. So that old worlds can blend nicely with the new, rather then creating a harsh cutoff.

Of course, I should probably show you what I'm talking about. I created 4 new worlds on 4 Minecraft versions to show off each iteration. I took the screenshot at the spawn point, except for 1.18, since I wanted to show off the mountains. 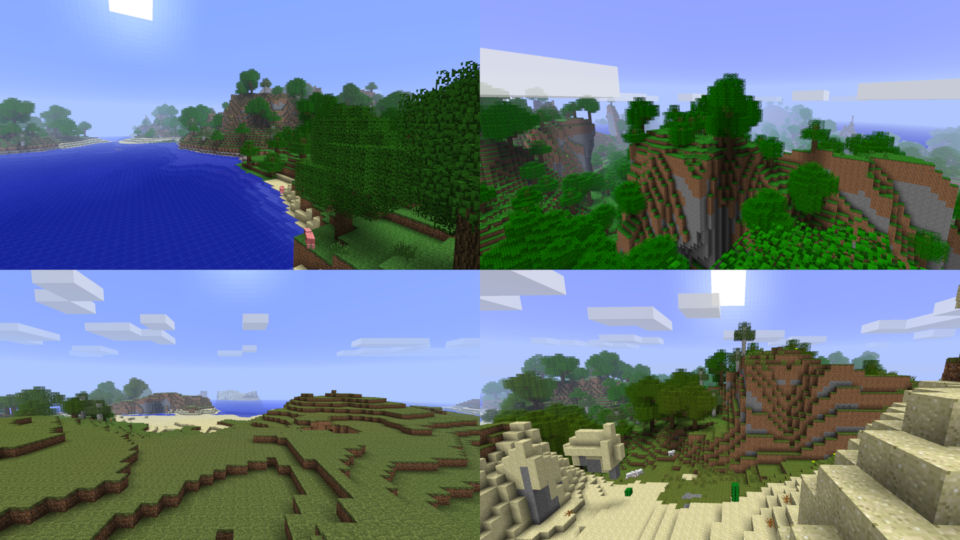 For the longest time, I've considered this the golden child of Minecraft terrain generation. Worlds are lush, varied, and interesting. This worldgen was first introduced in Alpha 1.2.

These days I'm more aware of the drawbacks. For instance oceans are too small and far too frequent.

Another interesting note is that differences in biomes aren't as stark as they are in newer versions. It can sometimes be hard to tell when one starts and ends. This ultimately makes the worlds feel more cohesive than anything that came after, even what we got now. 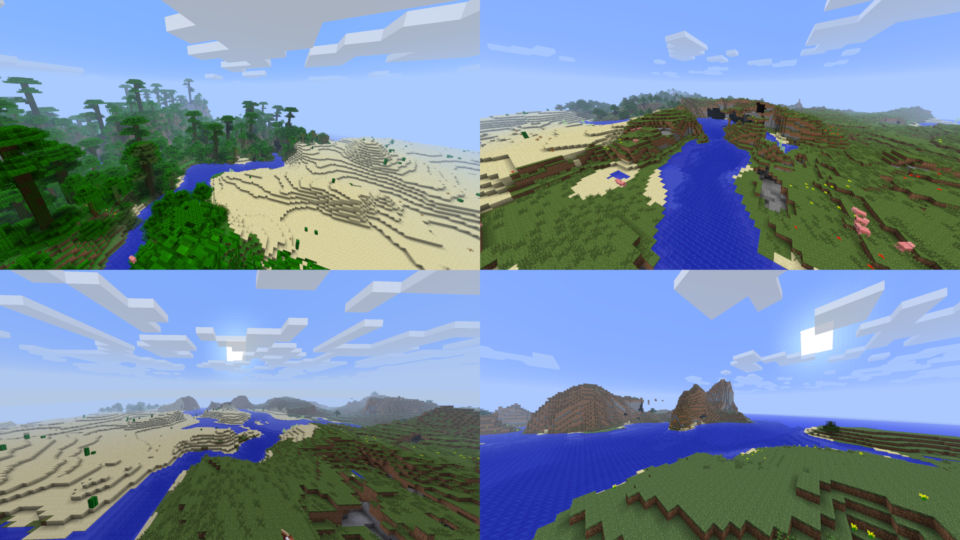 The final descendant of Beta 1.8's worldgen. I've always found these worlds to be way too bland and similar to one another. I don't miss it.

Some biomes were removed, and the oceans were way too large in these releases. 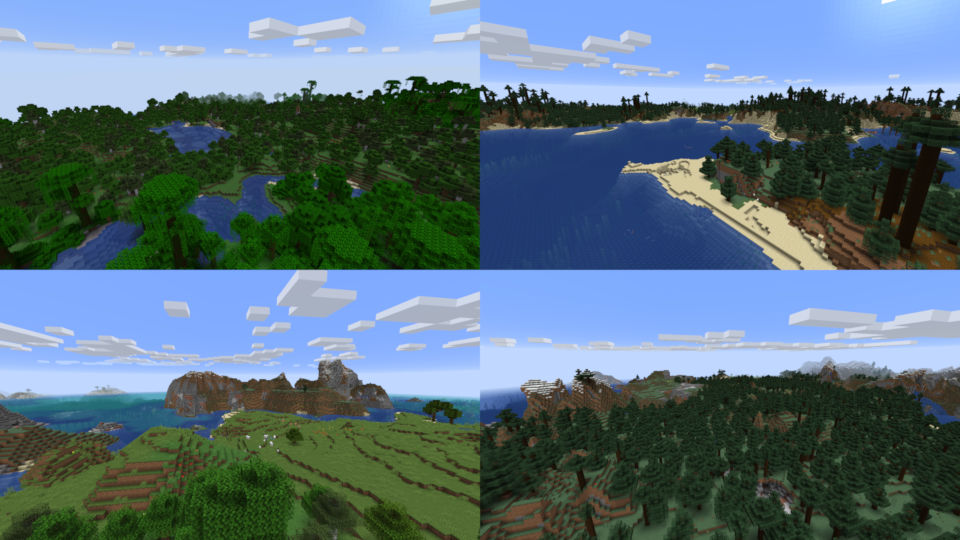 The final descendant of 1.7's worldgen. Things improved a lot with this update, Mostly flat with a few hills. Re-added many biomes removed in b1.8, as well as adding a few more. 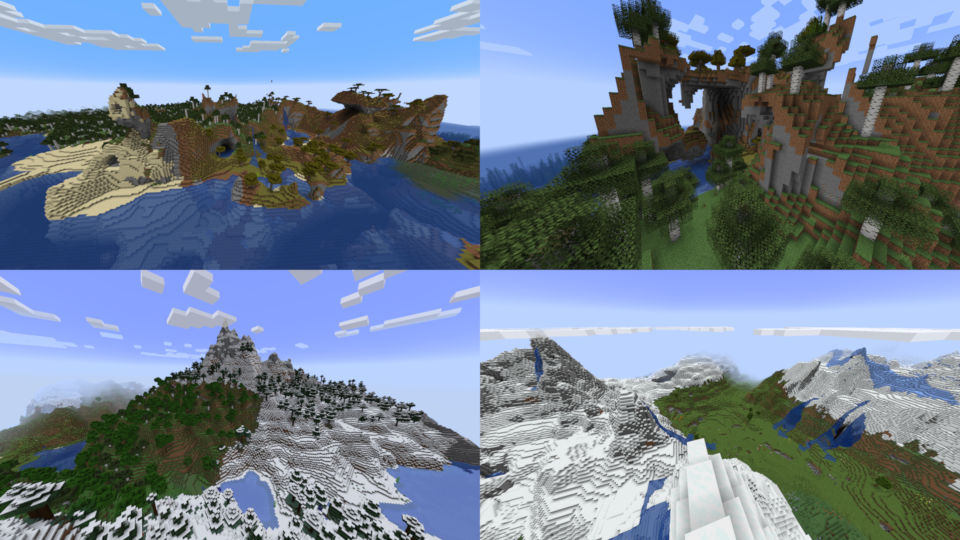 The "Caves and Cliffs" update presents the first truly exciting terrain generator since the game went 1.0. These screenshots are cherry-picked to show off the mountains. There is also plenty of flat land that resembles 1.16.